I’m writing this post to explain and justify some of the questions that people have asked when I’ve said that I’m buying brewing equipment from China. The short answer for those of you who can’t be bothered for the whole story is this: it’s a risk, but for the price, you can’t beat the quality.
But the whole story is a bit more complicated and if you’re interested in this kind of thing, I’ll explain my experience so far…

I’ve always been a firm believer in DIY. Doing it yourself is not only cheaper and more exciting, but you learn something new along the way. One of the main reasons I got into brewing in the first place was because I liked beers from America which were expensive and hard to find over here, so I looked online to find out if I could make them myself.

The internet is a great resource for things like that and I usually turn to Google and YouTube when I want to learn something new. Pretty much everything you could ever need is there at the touch of a button. You want a specific variety of hops from New Zealand? No worries. You want to learn how to build a 3 tier brewhouse from parts you can get at B&Q, you got it!

When I initially built the brewery we now have at the castle, it was a result of many years of learning and researching. Another homebrewer turned pro-brewer had started off his brewery using food grade stainless steel tanks from Italy, where these types of tanks are household items – used for making wine, olive oil or beer! They are incredibly cheap compared to stainless steel vessels made specifically for brewing, even the raw materials would cost more here than you could buy these tanks ready built in Italy. But they were just plain tanks, to turn them into a brewery, you need to do a bit of DIY.

Our Italian tanks have served us well and there’s nothing wrong with them really. Having adapted them as much as possible, they are suited to our basic brewing needs. But there’s a few things which I wanted to change on the fermenters which would involve TIG welding, which is something I’ve never done.

My DIY attitude was, now I need to learn to weld. So I started watching hours of YouTube videos on how to weld and what equipment works the best etc etc. It was starting to take up a lot of time before I’d even had a go or bought any of the pretty expensive equipment needed.

I spoke a customer of ours who mentioned that they worked in breweries doing hygienic welding. He said that even though what I wanted was possible, it would be very tricky due to how thin the Italian stainless tanks are. He gave me a rough indication of time and cost, which was a lot and that wasn’t including materials. It sounded like even a skilled professional wasn’t too confident.

Time is something which I don’t have a whole lot of anymore. And while I still believe that DIY is a good option, there are some things which are best left to professionals. Fermenters are probably the most important part of the brewery. Keeping yeast happy is what brewing beer is all about. A good fermenter creates a happy environment for yeast. If i tried to build my own, they need to be exactly as required, and that would be one hell of a challenge for a first attempt at welding! I pretty much gave up on the idea of doing it myself, and instead got in touch with a few brewery manufacturers for quotes.

What I was after was 4 x 400 litre fermenters with cone shaped bottoms and able to hold pressure of 3 bar. Also they had to fit through an 82cm wide door!

Brewery manufacturers in UK were quoting around the 4-5k mark for each fermenter – way out of my budget.

Looking for alternatives, I asked for recommendations from professional brewers who buy equipment from outside the UK. Germany has a great reputation for its brewing equipment and a price tag to match, Czech Republic is slightly cheaper and still high in quality.  Then there’s a whole bunch of Italian manufacturers who traditionally make wine equipment but recently jumped on the craft brewing revolution and produce equipment for that industry as well.

Some professional brewers recommended getting tanks direct from Chinese factories and a few companies were named as being better than others. The general consensus is that you can get good equipment from China for a good price, but it’s a minefield out there and taking a gamble on cheap kit from an unknown Chinese manufacturer is a bad idea. Reading up on the internet revealed some horror stories of Chinese tanks developing rust and leaking!

In an attempt to do my own research, last september I went to a brewing industry trade show in Munich called Drinktec – it was mind blowing and definitely worth visiting if you’re interested in beer. It’s also held just before Oktoberfest so combine the two for the ultimate beer experience! 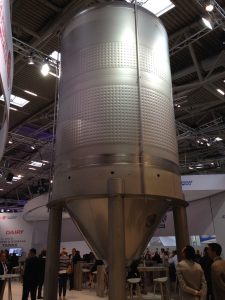 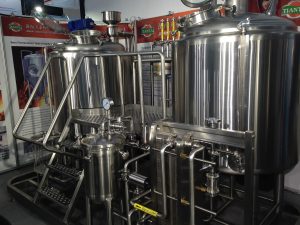 As much as i wanted to visit the beer festivals, I was there for business and more specifically to meet the manufactures who were exhibiting, see their equipment and get prices. Although having a free pint of Pliny the Elder IPA with Logan Plant – founder of Beavertown brewery was probably the highlight of the trip!

I came home with a suitcase full of brochures, quotes and freebies, and a completely new understanding of the technologies and innovations in the brewing industry. There were a huge number of Chinese manufacturers exhibiting and their kit on show was almost identical to the vastly more expensive German equivalents. There was a good reason why all the German equipment had NO PHOTOS signs all over it, the Chinese are definitely good at copying.
I decided that for the budget I had, getting exactly what I was looking for from a Chinese manufacturer was viable and an option worth exploring.

So with quotes from about 50 different manufactures all based in the same region of China, I began by narrowing down the options by getting referrals from their existing customers. Some suppliers only had a couple of referrals from Chinese customers, some had referrals from huge breweries like Heineken and suchlike. What I was looking for was referrals from UK microbreweries that I had actually heard of and could inspect the kit they bought. Only a handful of manufactures could provide that, and it really made the difference in confidence.
In the end I choose a company called Tonsen, who had been recommended by Loka Polly brewery and Breakwater brewery, both these UK customers spoke highly of the equipment they bought from them and were both in the process of ordering more from them. That was music to my ears. 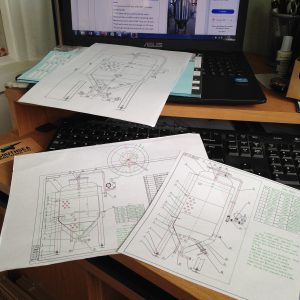 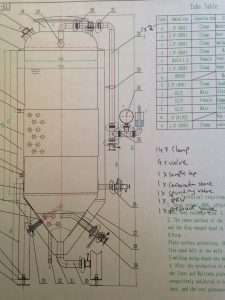 I spent weeks going over the specifications, making sure every valve, every angle, every dimension was exactly as we needed, until we had the design finalised and the price negotiated. I had confidence in their ability to produce what we wanted, but one of my biggest concerns was how we would get these tanks from the factory to our brewery in one piece. I’ve never imported things from china before so I didn’t know where to start – cue the google search.

Tonsen were happy to include delivery in their quote, but that would only get it to whichever port I asked for, after that it would be my responsibility to get it through customs and from the port (Southampton) to the brewery – only a few miles so how hard can that be? I thought I’d just take my van down to the port, load them up one by one and take them to the brewery – simples. Well luckily one of our customers is the port manager at Southampton and he talked me out of that idea and gave me some good advice, which was to use a importing agent.

The world of freight forwarding is full of jargon and pitfalls which can catch out the inexperienced and end up costing them a fortune in hidden fees, something which I really couldn’t afford! So there are a few terms which I had to get my head around; EX-WORKS price basically means the goods will be yours at the factory doors. FOB means free-on-board which means the seller gets the goods loaded onto the ship in China and from then on it’s your responsibility. CIF means Cost Insurance Freight, which means the seller includes the price of getting the goods to the specified destination port, but not unloading or any of the arrival fees, which can add up.

Tonsen’s CIF price was tempting, as it seems like getting it to Southampton is nearly the entire journey and the last leg to Portsmouth would be fairly easy in comparison to its voyage up to there. However I was warned that the CIF price would leave a lot of unknown charges passed on to the buyer when it lands. So i decided to get the FOB price from Tonsen, they would pack the fermenters into wooden crates, load them into a container and take them to Qingdao port. At that point our importing agent would take over and their price included the shipping, import fees and insurance to get them to the door of the brewery.

If anything goes wrong, insurance covers it, apart from one thing – force majeure. Force majeure is something which no one has control over – an act of god. Basically if there’s a tsunami and my container falls off the ship – it’s good bye, if a war breaks out and the ship gets commandeered by militants – no fermenters for me. These are things which no contract or insurance covers. Obviously ships bring goods in from China every day and what is all very straightforward and commonplace, seems quite scary to me! The control freak in me would want to go to china in my trusty van and pick them up myself! 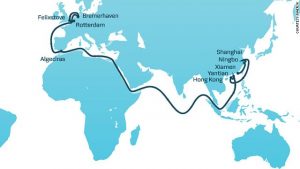 So with all the steps agreed and in place, all I had to do was the small task of wiring the money over and they would start production, which would take 3 weeks. One of the tips I was given when reading up on buying brewing equipment from China, was to use an escrow service such as Alibaba trade assurance. Essentially this service holds the money until 30 days after the goods are received. Once you are happy with everything, they release the money and the factory gets paid. That seemed like a no-brainer, Tonsen were happy to use that service and it gave me an added level of confidence in sending thousands pounds to someone I’d never met! 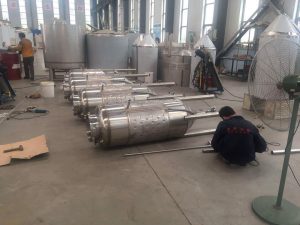 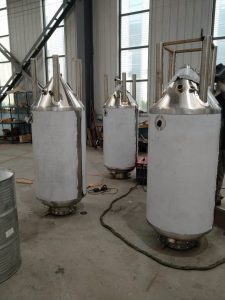 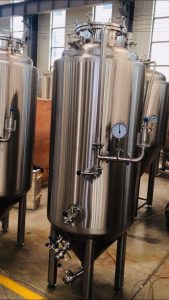 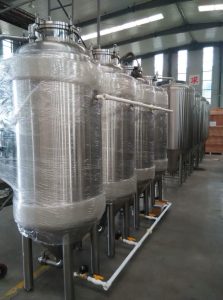 So that’s pretty much where we are up to. The money was sent, production started and within a few days I was being sent photos of the fermenters being built. Lots of photos and about a month later they were loaded up in a massive wooden box on the back of a slightly dodgy looking truck. As of today – 21st July 2018 our fermenters are being loaded onto the cargo ship which will start it’s month long journey across south east Asia, past the bottom of India, up the Suez canal, through the Mediterranean, and up the Atlantic coast of Spain and France until it reaches the Solent, where it will closely pass Southsea Castle before docking in Southampton. We will be tracking the ships progress on a live shipping map, so when it’s passing, we’ll go out on the ramparts of the castle and watch our container sail by.
Exciting! 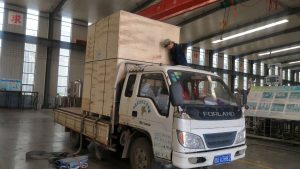 I’d like to talk about why we wanted new fermenters and the technical details of what we ordered, but I’ll save that blog post for once they arrive. Fingers crossed!